A stolen Yankees t-shirt. A deal to avoid punishment. A date to a dance. A few moments that change the lives of Lily, Sophie, and Pete forever. Pete, who stole the t-shirt on his 16th birthday because his neglectful mother and abusive father haven’t celebrated his birthday in years. Sophie and Lily, sisters orphaned ten years before as a result of a car accident that killed their parents. Lily offers Pete the deal. He can keep the shirt if he asks Sophie to the End of Year Dance.

The Dime explores how three young adults form a social family when their parents, either through the accident that killed the girls’ parents or the abuse and neglect of Pete’s, are not available or present to provide them with the love and support they need. 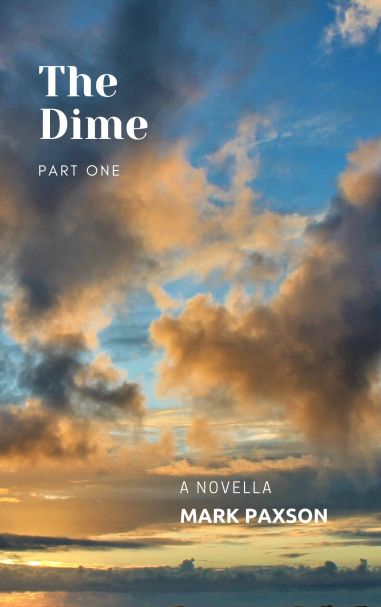 When I originally started this story, it was a short story that was initiated with a prompt — tell about a shoplifter who is let off as a result of a deal made with the store clerk. Just a little 1,500 word piece that I thought I was done with. Then I went to the Mendocino Coast Writer’s Conference and submitted the story for the morning workshop I participated in. By the time that three-day workshop was done, I knew I needed to write more.

I ended up with a 30,000 word novella that I thought was it. My teenage son read the final draft of the thing in one night and told me in the morning that he liked it, but he was unhappy with it … because he didn’t feel like the story really ended. Basically what he says about every story of mine that he reads.

I thought about it and pretty quickly came up with an idea for a three-novella series about Pete, Lily, and Sophie. I set out to write the next two parts and, as I seem to do all too much these days, got bogged down in the writing of the second part. Until recently. Yesterday, I wrote the ending to Part Two. I need to run it through another round of editing and then have a couple of people read it. Maybe run it by my favorite editor, too.

Once that’s all done, I’ve decided to try to get an agent for this — to pursue traditional publishing for what is done, and for what may continue to come out of me when it comes to these three crazy kids. If I can stand it, I can see multiple stories spinning out as they go through the next few years of their lives. But there are other things I want to write as well. Whether I write more of this story likely depends on whether it gets published and whether it develops any kind of audience at all. One issue is that the ending of Part Two pretty much begs for more … again.

In addition to finishing Part Two, I have now posted all of Part One on WattPad. I’m not entirely thrilled with the outcome so far on that site. As near as I can tell, nobody other than a handful of social media friends have read it and nothing I’ve done on the site has produced eyeballs unknown to me to give the story a try. So, if you’re so inclined, head over here, give it a try. The more views, comments, and votes for the story, the better the chance of others noticing the story and giving it a try.

About the name. I was the youngest of four. Until I got to kindergarten, I didn't have much to say. All I had to do to get what I wanted was to point, and a sibling, or loving parent, would fulfill my request. As a result, my father coined the nickname -- King Midget. At least that's the way the story goes. I am a father, husband, friend, and lover, writer, runner, pizza maker, baker, and many other things. What I am not is my occupation. It is my job that pays the bills and provides for my family. But, it does not define me.
View all posts by kingmidget →
This entry was posted in Uncategorized and tagged Fiction, Northville, Novel, Novella, The Dime, WattPad. Bookmark the permalink.

1 Response to The Dime … Again Again