The Story Behind the Story

I feel kind of like a magician revealing the secrets, but as a reader I have always wanted to know how authors come up with their stories and get from beginning to end.  Chicago, was a particularly trying story for me.  For the most part, when I have written a short story, it doesn’t take me too long to do so.  A few days, maybe a week or two.  Before you go further, you should really read the story first.

Chicago was different and it’s likely because of how the idea came to me and that I struggled so mightily with where I wanted to go with the story.  There were many ways I could have gone with it.  So, here’s the story behind the story.

A little over three months ago I went on a short backpacking trip.  A couple of nights at Point Reyes — a beautiful part of the coast of California just north of San Francisco.  I drove there on a Monday morning and set up my tent and then wandered around the beach and sites close by.  This wasn’t really wilderness camping since it was at a place where there were a dozen or so campsites, complete with numbers and a building with two bathrooms.  As the day wound down, the people camping closest to me returned from a hike.  Three women out experiencing nature and spending some quality time together.

That first night, as I walked past their camp several times, back and forth to the bathroom or to the faucet, I exchanged little with them other than a “How’s it going?”

The next day, I got up early for a walk along the coast that turned into an 8 or 9 mile round trip jaunt.  On my way back, the three young ladies were going in the opposite direction.  We exchanged a larger conversation about what was ahead on the trail and the beauty of the place.  Turns out that the day before they had arrived and hiked a different trail that took them to a waterfall that empties into the ocean.  Clearly, I was in the wrong place.

After our conversation, I headed back to my tent, stopping first to take some pictures. 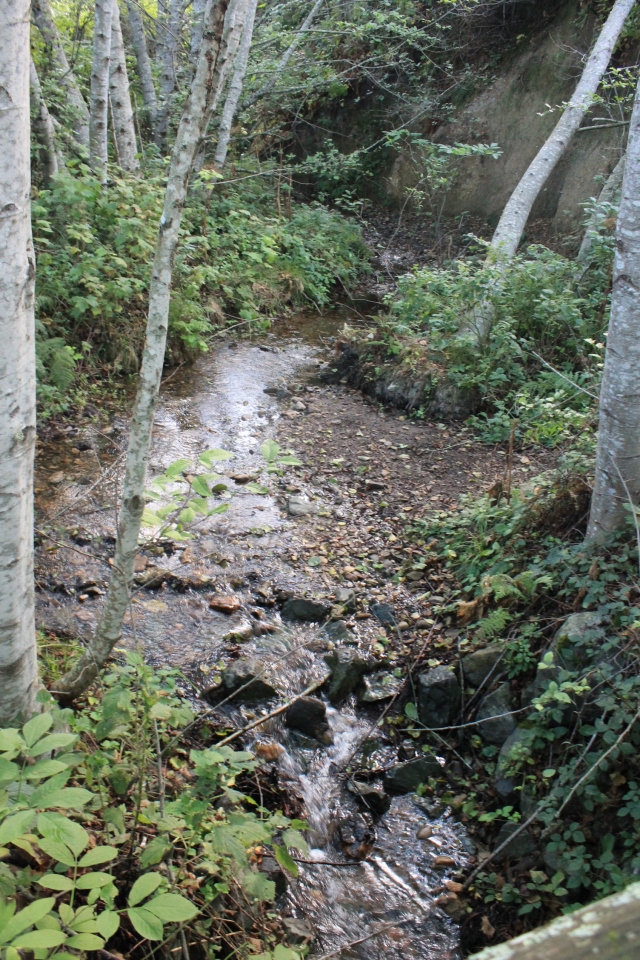 My fellow campers passed me while I snapped away and eventually we all made it back our respective tents.  Somewhere along the way, I learned that one of them lived locally and all three of them went to college together.  The other two had come out to California to camp together for her birthday.  One of them was from Chicago.

Over the next few hours, I struggled with my tent because the wind really picked up.  Eventually, I gave up and packed up and hiked back to my car, convinced my tent wouldn’t survive much longer.  Staying for my second night wasn’t worth having to remain sitting in my tent to keep it from blowing away.

I thought at some point of this great opening line to a story.  “I called her Chicago because that was the only name I had for her.”  Built around the idea of meeting somebody and having a passing conversation in which no names are exchanged, but something happens.  Beyond that, I didn’t know.  I had no idea what would happen.  I just knew I liked the line.

The idea percolated for a time.  I typed the line into a Word document and let it sit on my computer.  I started to scratch at the idea and came up with the idea of a girl sitting down and proposing to the narrator and going from there.  I wrote a paragraph or two.  And let it percolate some more.  Now that I had the idea, I had no idea what to do with it.  Yeah, a girl sits down on a bar stool and proposes to a stranger, but what then?  Are they really going to go through with it.  I didn’t know if I wanted them to actually get married.  And if they didn’t get married, where and how did I want it to be revealed for what it was — just an odd little joke.

It was a struggle.  Along the way, a few things happened.

I was at the Taco Bell down the street getting lunch.  There was an older woman there.  She had gone to the bathroom and then left the restaurant only to realize she had left her wallet on the counter in the bathroom.  She went back in to get her wallet and walked back out only to realize that she had locked her keys and her cell phone in her car.  She was from Arizona visiting friends.  She didn’t have any phone numbers for anybody because it was all in her phone.  I offered to drive her back to the friend she was visiting.  As we walked to my car, I joked that I hoped she wasn’t a criminal.  Yes, me — the guy with the scruffy beard and faded jeans.  Oddly enough, she trusted me and I got her back to her friend’s house.  Her name was Lavonna.  When I was casting about for a name, she became the narrator’s Aunt.

Much of the rest of the first half of the story was just what came to my mind as I worked through it and it was painful to write.  I just didn’t know what I really wanted to do with it and so for weeks, while the idea percolated, I wrote a paragraph here and a paragraph there.  All the while, I pondered the idea, were they really going to get married.

Finally, there came a point where I had to cut to the chase.  I couldn’t go on and on with them sitting in the bar.  I had to make a decision, so when they discovered they both liked cats, the deal was done.  They were getting married.  I thought of writing about their flight, about his ultimate decision to keep Aunt Lavonna on ice a little longer, I thought about all sorts of things at that point, including how the story might end.

I also decided that we didn’t need any more details about their flight or anything else.  It was time to get to the wedding.  The rabbi was based loosely on a rabbi who used to lead the congregation my family is a member of.  Meanwhile, I realized that during the course of the nuptials, the rabbi would likely say her name and if that happened, the opening line wouldn’t really work anymore, would it?  And I also wondered if I needed to reveal the narrator’s name.  Did I?  And how could I make the name reveal work.

Well, I found a way.  And I also decided that if the reader would never know her name, there was no reason to know his name either.  A little bit of a seque here — at a writing conference during which I spent three mornings with the same group of 12 writers, critiquing each other’s work, one writer’s oft-repeated criticism of virtually all other stories was that they didn’t tell the reader enough about the characters or the setting or something.  And I wanted to keep telling her that I didn’t want that detail.  I think it’s important to leave a lot to each reader’s imagination.  My image of Chicago may be different than yours and yours and yours.  My image of the narrator and what his name is may also be different.  I want the reader to create some of this in his or her own head and not have me direct all of it to only one possibility.

So, yeah, he calls her Chicago and you have absolutely no idea what his name is.  Except for what you want it to be.  I hope you don’t mind doing that work.

The final thing I thought I needed to do was deny the narrator the thing he wanted so desperately.  Because, while I think he’s a romantic and I believe there’s hope for him and Chicago in the long run, the reality is that … well, let’s just say Chicago is floating his boat in a big way.  I couldn’t make it completely easy for him.  So, yes, she denied him in the two days leading up to the wedding and, yes, she toyed with him a bit as well.

Truth is, I thought of him denying him completely on their wedding night and insisting on a five date minimum when they got back to Seattle because that’s her rule.  No hanky-panky until at least the fifth date.  But I realized something.  It was time to end the story.  So, she only toyed with him a little bit.

Second truth is … there could be all sorts of more story here.  This just scratches the surface.  What happens to these two little lovebirds?  It’s an interesting question.  I may never answer it.  Here’s a challenge for you … if you’re a writer and want to take the challenge on, write the next 5,000 words and send it to m.  Who knows … maybe I’ll write the next 5,000 words and somewhere along the way, we’ll have a real thing.

About the name. I was the youngest of four. Until I got to kindergarten, I didn't have much to say. All I had to do to get what I wanted was to point, and a sibling, or loving parent, would fulfill my request. As a result, my father coined the nickname -- King Midget. At least that's the way the story goes. I am a father, husband, friend, and lover, writer, runner, pizza maker, baker, and many other things. What I am not is my occupation. It is my job that pays the bills and provides for my family. But, it does not define me.
View all posts by kingmidget →
This entry was posted in Fiction, Mark Paxson and tagged Chicago, Fiction. Bookmark the permalink.

8 Responses to The Story Behind the Story