To Believe in an Omen

Today is one of those holidays us California government employees get that nobody else does.  Cesar Chavez Day, to honor a man who was the Martin Luther King, Jr., for migrant farmworkers.

A day off when nobody else has it off opens up a lot of possibilities.  I got some things out of the way yesterday (laundry, planting the vegetable garden) so I could have this day free of obligations.  As I said to the family, “It’s a day off.  I want to be able to do whatever I want instead of having to do something.”

So, I started the day off with a short drive to the Cosumnes River Preserve.  More than 50,000 acres of sloughs, rivers, creeks, bogs, trees, and wildlife, with trails winding through it all.  It’s a nice piece of nature so close to home.

There are ducks.  Lots of ducks. 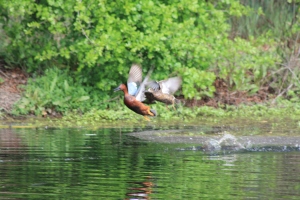 The preserve is divided by a two lane country road.  I spent an hour on the east side and realized that I was missing something there.  There are lots of times when I drive around the countryside that I see white herons (aka great egrets).  Something attracts me about them.  They don’t wander the world in flocks.  Or at least don’t appear to.  It seems whenever I see one, that is all that I see.  A lone bird in a meadow or along the edge of a river or creek.

I didn’t see any on the east side.  I wandered over to the west side, where there were many more large pools of water filtering through the sloughs.  Lots more ducks.  And, then I saw him.

I spent some time watching him. 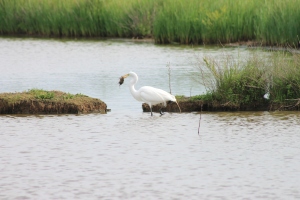 Yep, the white heron was hunting a mouse.  And here’s his smug look after he swallowed it.  Whole. 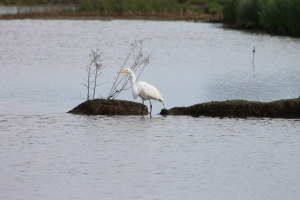 What you ask has this to do with an omen.

Over two and a half years ago, a fellow writer had the following to say about what he had done that morning , “Spent the morning staring at the water on Mobile Bay and watching a Blue Heron fishing.”  There was something about that image that lit something in me, a story about an old man living alone on the edge of bay, more happy with the company of a whooping crane than with the people who insist on crowding him, more happy being alone than being reminded of the wounds of his past.  The Irrepairable Past is what developed from the idea.  It’s half way done, but I haven’t touched it since last summer.

A couple of weeks ago I finished Northville Five & Dime.  I was already to move back to The Irrepairable Past, a story where a whooping crane plays a small but critical role.

I looked out over the bay, calm now in advance of the evening’s approach.  The sun burned at the horizon’s edge, an eerie half ball of fire sending ribbons of orange turning to red and purple through the cotton ball clouds dotting the sky above the water.  Near the shore, a whooping crane herked and jerked as it sought its nightcap in the shallows.  Bob, as I’ve come to call the crane, and I have an understanding.  With the sun that rises and sets, and the breeze that comes in off the lake and the sound of the whippoorwills that announce the coming of night, Bob honors me with his presence.  I have yet to figure out what I provide him in return.

Then beta readers started reading Northville and I got the idea that maybe there was more story to tell there.  As a result, for the past 2+ weeks I’ve been paralyzed, torn by what to do.  More Northville or a return to the shores of Sullivan Bay, where Bob awaits.

I’m choosing to look at this morning’s trip and the presence of the White Heron (yes, I know it’s not a whooping crane, but what I saw this morning was almost exactly what is in my mind’s eye when I imagine Bob herking and jerking in the shallows of Sullivan Bay) as an omen.  The rest of the story in Northville will have to wait.  It’s time to head back to Sullivan Bay.  Henry Thornton’s tale needs to be told.

About the name. I was the youngest of four. Until I got to kindergarten, I didn't have much to say. All I had to do to get what I wanted was to point, and a sibling, or loving parent, would fulfill my request. As a result, my father coined the nickname -- King Midget. At least that's the way the story goes. I am a father, husband, friend, and lover, writer, runner, pizza maker, baker, and many other things. What I am not is my occupation. It is my job that pays the bills and provides for my family. But, it does not define me.
View all posts by kingmidget →
This entry was posted in Uncategorized and tagged Choices, Cosumnes River Preserve, The Irrepairable Past, White Heron, Writing. Bookmark the permalink.

16 Responses to To Believe in an Omen